Todays One People Round table opened up with a familiar rant about politics- specifically Russia’s newly cemented friendships in the Middle East. and Hillary. But I refused to go there… well cause. Dani blew her top over one of the biggest WTF Effects she has seen so far: Japan bombed mainland USA and Canada during WWII?!? ….. Certainly didn’t happen in her/our timeline/dimension/reality!!!

The second half of the show we had a guest join us, Willogby Miro, to discuss some very interesting theories and pieces of information coming out of Russia right now. Info about obviously changed history, and a new twist on the “flat earth” theories that open some doors to interesting speculation!

Below are the original Russian videos, and Willogby’s notes in English. and links.

Side note: There are some awesome pieces of information coming out of non-english speaking countries that are being lost to english speaking researchers, due to the language barrier. We would love to see people who speak more than one language use their skills to help translate some of these excellent videos and articles.

Willogby: That is a picture of Earth millions times bigger ..,than what they teach in school.., our place is a small peb (12000 miles diameter ) as in pomegranat ..,there are ~ 300 thousands various planets on different stage of evolution like ours with humans, and flora ,fauna.., nested like in a sunflower ..,

All Planets of our Cosmos…or Cosmic area what astronomy talks about as planets..,
Are actually planets nested in a huge sphere like in a bee-hive structure ..,
Examples : Sun-Flower.., Pomegranat.., Beehive..et.c.
Within a hexagon structure there are 3 planets nested together and separated by the wall of ice ( Antarctica ) that separates the neighboring planets..,see attached picture
The shape of this huge ball is a Sphere ..,let’s call it Great Planetary Sphere !
There are millions of Planets like ours with continents and oceans on various levels of evolution with flora , fauna , and human beings on it.., Atmosphere and geology..and climate is different..,
As well as physical size of Human beings varies..,Flora and Fauna as well..,
The shape of every planet it curvy spherical …similar like if you cut the top section of sphere and surround it with cylindrical wall of ice…, typical of every planet on a Great Planetary Sphere..,
There were times when visitors from other planets came and took over the planet.., predators of all kinds.., that was unfortunate experience of local people residing peacefully in the paradise of nature..,
Our planet and rocks and trees and our genetic memory remember the tragic disasters caused by predators.., and it is our sole responsibility to wake up.., and stand for making proper cleaning process..,
To bring the harmony and peace among people and nature to balance.
Our Planet name : Midgard which means middle Earth !
There is one Sun-Yarilo that serves three planets and Yarilo is moving around the planetary plane to create seasons.., and besides that there are possible two additional not moving-suns for each.., that can be switched on/off like lamps.
On the Top of each planet there is dome like membrane separating and isolating the planetary atmosphere from any intrusion or dirt..,
On the bottom planets are floating ..in the water substance..,

Where there are gigantic wales serves for the maintenance and stability of movement and floating of planetary lands..,(remember the story of earth on three wales ) 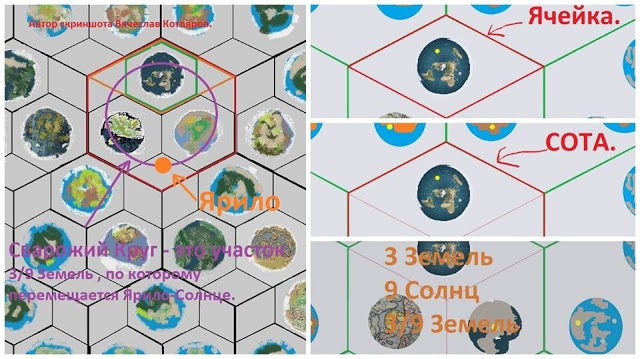